If you grew winter wheat, in late spring the heads will bulk up and turn beautiful, then the plant will start to turn brown. ... You can start harvesting as soon as the wheat seeds pass the milk stage, although the grains will need to dry up and harden a bit before they're ready to eat.

Turning from green to brown is one excellent way of judging the development of the wheat. Then you need to watch the head. Straight up and down means that it's not there yet. When it bends over to better release it's seeds you know it's very close.

Place a kernel of wheat in your mouth and bite down, it should crunch. It should not be soft or chewy. If it's chewy, leave it awhile longer to dry down. 3) Nodding – Seed heads will start to nod or bow on the stem when they are ready to harvest. 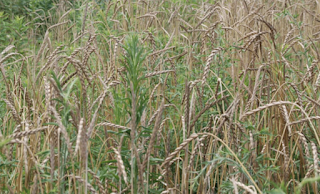 Tares will inevitably grow up and around the wheat.  It is best to leave the Wheat and once the  is ready to harvest then the tares are easy to spot and pluck out because they will not BEND.  They stand proud and tall.  This makes it easy to remove.
The final test is to check the moisture content of the seed. 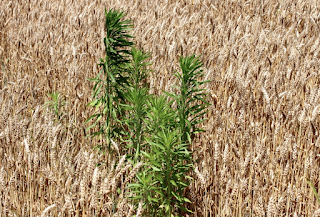