Are We On God's Timing?

WHAT?
The first thing we have to understand is God warns of “changing times and laws” (Dan. 7:25). The calendar principles go back to the first chapter of the Bible, where the sun and the moon were appointed “...for signs, and for seasons, and for days, and years” (Gen. 1:14). So if we do not use the calendar Yehovah instituted then when was it changed, why was it changed and by whom?

HOW?
How do we get back to God’s Calendar?
The best source for that is the Bible. Gen 1:14, "Then God said, Let there be lights in the firmament of the heavens to divide the day God made the lights in the heavens (the sun and the moon) for days and years. There is another verse we need to read. Psa 104:19, "He appointed the moon for seasons; the sun knows its going down.”  Following the lunar system gives us Yehovah’s timing.  Yehovah is on HIS time not ours, certainly not the world’s and certainly not Satan’s.

Detailed HOW
The Hebrew lunar-solar calendar is the true calendar for Yehovah’s people . YEHOVAH (God) Himself established it, and gave it to the children of Israel when they came out of Egypt (Exodus 12:1).
However, its principles go back to creation, when the sun and moon were appointed by YEHOVAH God “for signs, and for seasons, and for days, and years” (Gen. 1:14). The word for seasons here is moadim and literally means “an appointment, a fixed time or season; a FESTIVAL, by implication, an assembly” (see Strong’s Exhaustive Concordance, #4150). YEHOVAH appointed the heavenly bodies to determine the “appointed times” of His weekly sabbaths, annual Holy Days and Festivals from the moment of Creation!
All authorities agree that the basis in law for YEHOVAH’s calendar is indeed found in Genesis 1:
"And God said, Let there be lights in the firmament of the heaven to divide the day from the night; and let them be for signs, and for seasons, and for days, and years."
"And God made TWO great lights; the greater light to rule the day, and the lesser light to rule the night; he made the stars also" (Genesis 1:14, 16).
We can, at the very lest, realize that whatever these “lights” are, they are natural phenomena which clearly dictate the rules of order for calculating time. And, notice this, it is not a singular source of light (i.e. the sun) but ALL collectively, “Let them be for...”
Signs, Seasons, Days and Years
The Bible (in Genesis 1:14) only tells us what source we are to use for calculations. But there seems to be no explicit instructions on their practical implementation. Marking off seven ”solar-day" periods which never correspond at the beginning or end with heavenly lights does not satisfy Genesis 1:14.
Those four words in Genesis 1:14 -- signs, seasons, days and years -- can be defined in the following way:
1) Signs fairly defines the underlying Hebrew word implying astronomical events such as eclipses, and other we observe with our eyes in the sun, moon and stars -- reminding us of oaths YEHOVAH God has made to us (Jeremiah 32:35-36).
2) The sun generally marks days.
3) After 12 moon cycles have passed, the earth would have gone through nearly four seasons of weather changes constituting a year, marked with the sun by four distinct earth tilts called equinoxes and solstices. These are determined by the angle of the sun throughout which the sunlight hours grow longer to a threshold at which they then begin growing shorter again.
4) Finally, the word seasons appears at first glance to be the four radical weather shifts each year -- winter, summer, spring and fall or autumn. However, although the English word certainly implies such, the underlying Hebrew word “mowadah” (Strong’s #4150), literally means “an appointment, that is, a fixed time...by implication, an assembly (as convened for a definite purpose); technically the congregation; by extension, the place of meeting...”etc.
To use the English word “seasons” to translate a word that literally means an appointment is, at the very least, a grave error. Besides, we have just seen that the sun (equinoxes and solstices) marks the four seasonal changes which constitute an actual year. To interpret the Hebrew word mowadah to mean those seasons is duplicitous at best.

In the Book of Psalms we find the answer to the enigma of the apparent deliberate mistranslation. There the same word -- mowadah -- is used specifically in relation to the moon:
"He appointed the MOON for SEASONS [mowadah]..." (Psalms 104:19).
According to Strong’s Concordance, the English word appointed in this passage actually means “made” (#6213). In other words, YEHOVAH made the moon for appointments! What are His appointments? Notice Leviticus 23:
"Speak unto the children of Israel, and say unto them, Concerning the FEASTS of the LORD, which ye shall proclaim to be holy convocations, even these are my FEASTS. Six days shall work be done: the seventh day is the sabbath of rest, an holy convocation; ye shall do no work therein; it is the sabbath of the LORD in all your dwellings" (Verses 2 and 3).
The word “feasts” found in verse 2 above is, in fact, the word mowadah -- the same as “seasons” in Genesis 1:14 and Psalm 104:19. Following the Sabbath mowadah in Leviticus 23 is the list of what we commonly call “feasts,” including Passover/Unleavened Bread, Pentecost, Trumpets, Day of Atonement and Tabernacles. ALL ARE “MOWADAH.” The mistake in translating mowadah strictly as “feasts” becomes very obvious when in verse 3 the sole subject is the seventh-day Sabbath. Most people generally don’t consider the Sabbath as being a “feast” per se, but it leads the list of “feasts” in Leviticus 23.
With this in mind -- the actual planetary moon being established for mowadah or YEHOVAH’s appointments as shown in Psalm 104 -- the passage in Leviticus confirms the fact that this is the sole means by which the seventh day Sabbath was calculated. The Sabbath is a mowadah -- the moon was made for mowadah. Nothing in the Bible specifies this term for the sun.
Another witness to this understanding is found in the Book of Ecclesiasticus:
"And then the moon, ever punctual to mark the times, an everlasting sign: It is the moon that signals the feasts, a luminary that wanes after being full. The month derives its name from hers, she waxes wonderfully in her phases, banner of the hosts on high, shining in the vault of heaven" (Ecclesiasticus 43:6-8).


This text was originally written in Hebrew in the time-frame of 190-180 B.C. and translated into Greek in approximately 132 B.C. Notice in verse 7 the word feasts. Its underlying Greek word (heorte -- #1859) is the same as the one in the Septuagint Version of Leviticus 23:2 -- in which verse 3 includes the seventh-day Sabbath. Although Ecclesiasticus is considered apocryphal, it runs contrary to its contemporaries (Enoch and Jubilees) which insist that the sun is the only means by which to calculate feasts and Sabbaths.

“The reason this calendar is so significant is because it helps people understand the Bible and the Messiah’s message,” says A Rood Awakening! International CEO Eric Fransen.


Christine Vales www.christinevales.com. has Chalkboard Teachings that are very good for a beginner. 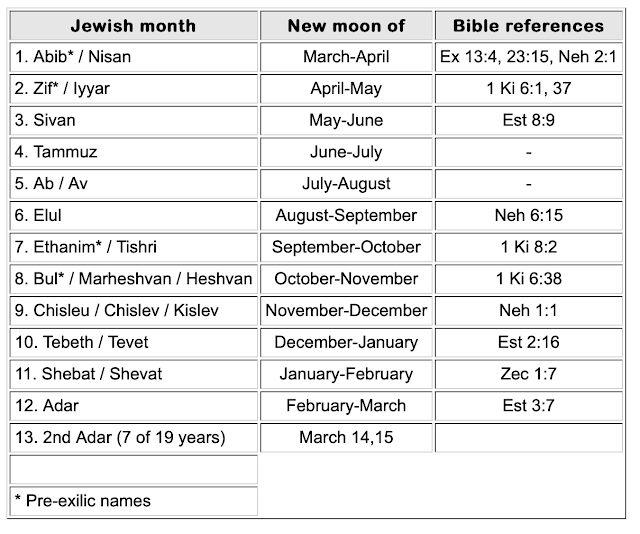 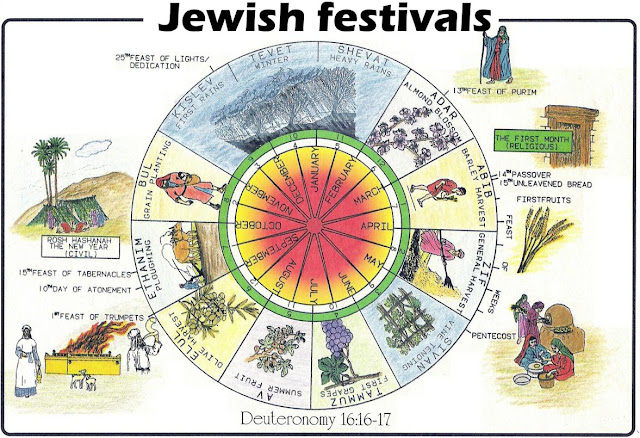 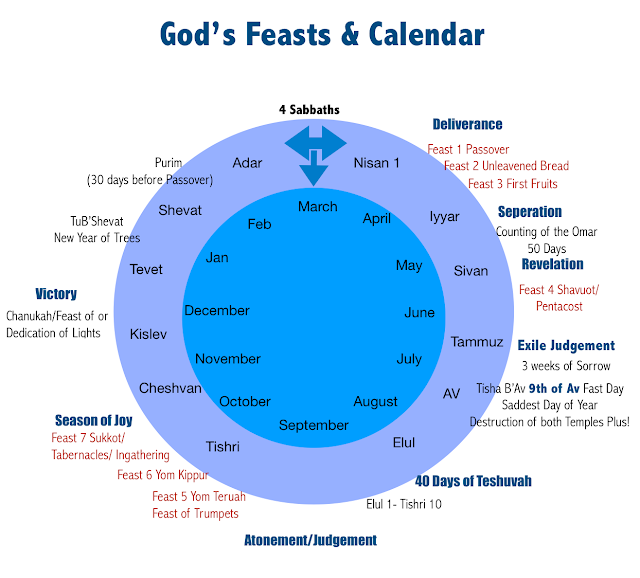 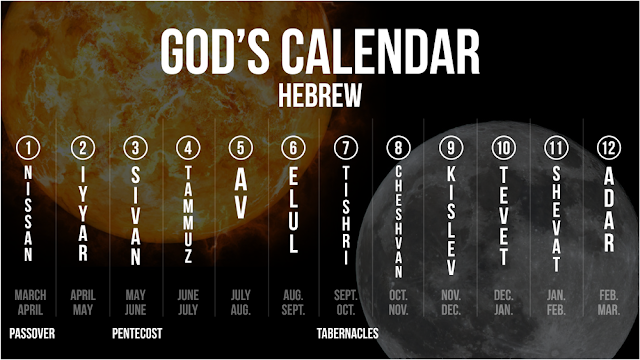 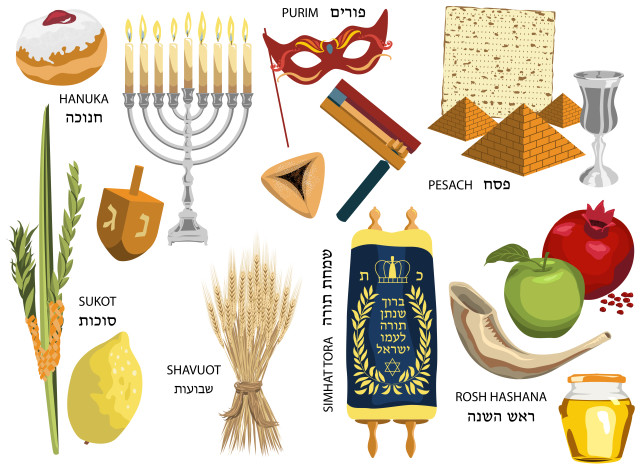 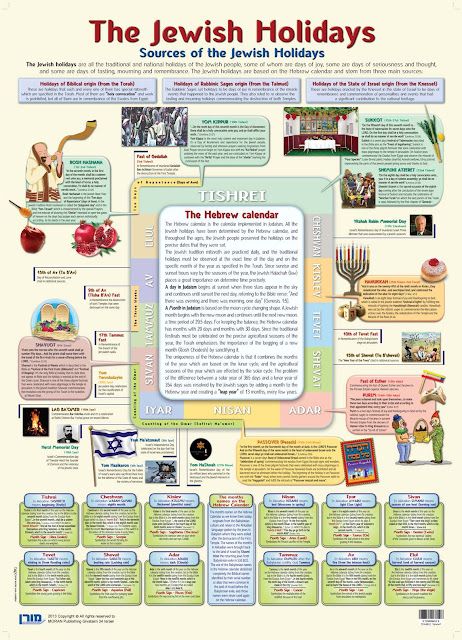 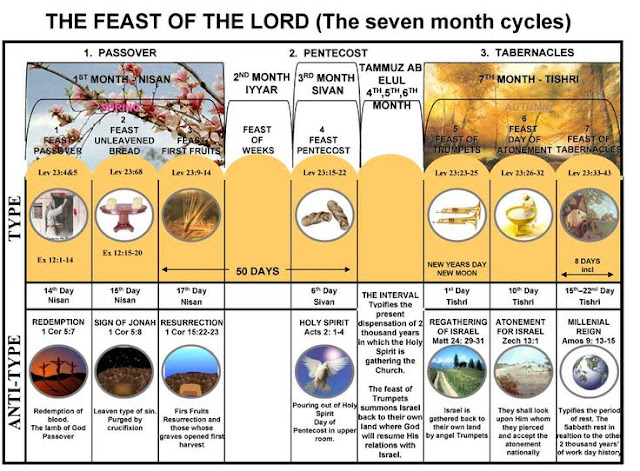 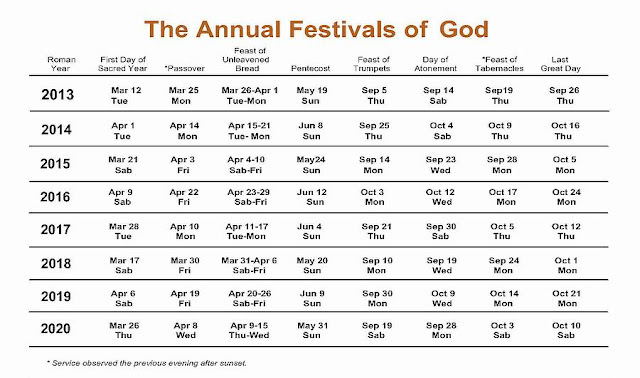 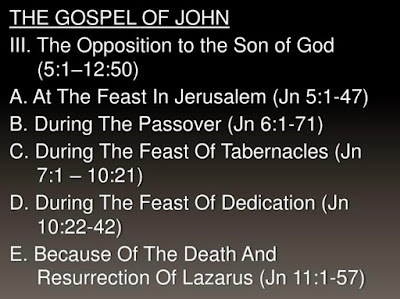 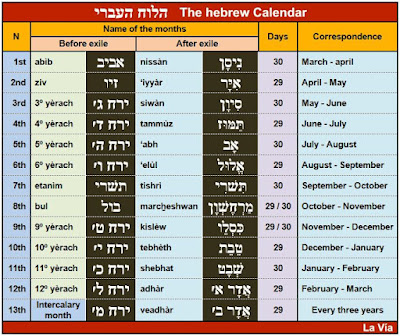 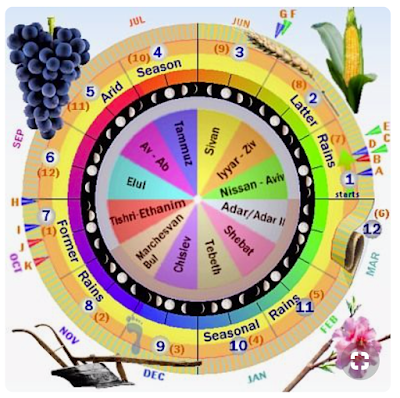 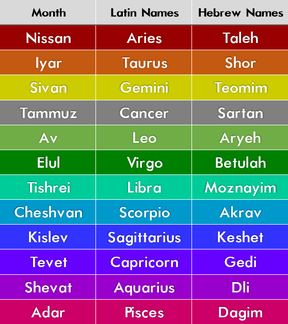 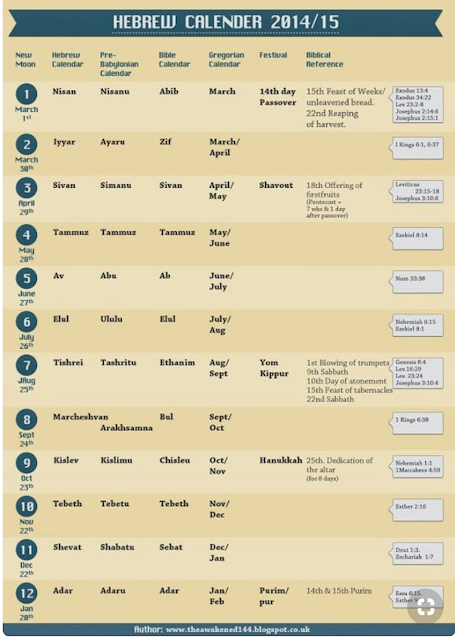 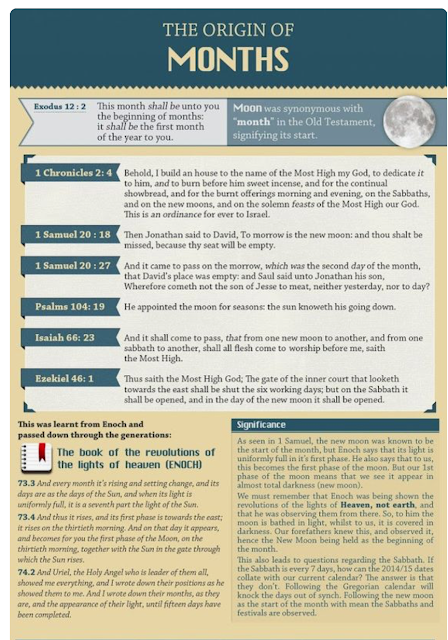 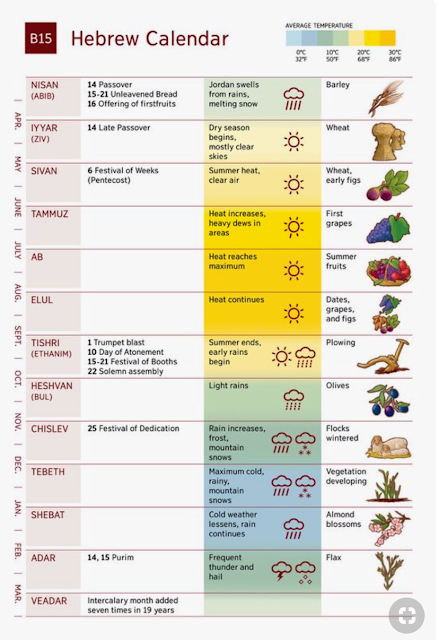 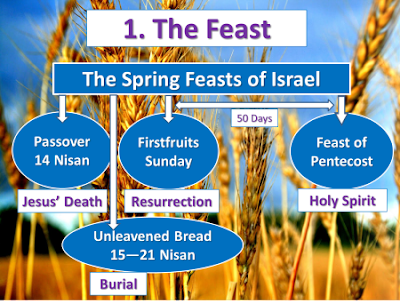 What's up with Rosh Hashanah?


So What's up with this Rosh Hashanah?  Where did that come from if not from Yehovah? Lets go over a bit of history to better understand it.  Just how many NEW YEARS are there?  There are 4 New Years, yes four!  Yehovah says the original first 1st New Year is Nisan 1, hebraically called Aviv or Spring Exodus 12:2.  Also, the Hebraic calendar is lunar(moon) and can fluctuate by observance changes i.e. when the New Moon was sighted a new month begins.

The Torah identifies Sukkot i.e. Feast of Tabernacles, as the end of the harvest year Exoducs 23:16, the sages of the Mishnah labeled the Fall month Tishri 7th month as the start of the new year.  During the Babylonian Exile, 6th Century BC, Babylonian names for the months were adopted instead of the number system used in the past.  By the time the Mishnah was completed in 200 AD, the sages had identified four new-year dates for every lunar-solar year and adopted by Hillel the Elder in 3rd Century AD as follows:

Elul 1 Marks the start of the year from the point of view of tithing cattle for Temple sacrifices.  Since the Second Temple was destroyed in 70 AD, the rabbi decreed that this date should mark the time of Selichot or preparation for repentance before Rosh Hashanah.  Elul 1 thus is the the start of the last month of summer.

Tishri 1 was originally associated with the agricultural FEAST of INGATHERING/Tabernacles at the end of the year Exodus 23:16, 34:22.  After the destruction of the second Temple, the sages decided it would mark the start of the civil year in the Fall.  Tishri 1 was therefore called Rosh Hashanah the head of the year which begins a 10 Days Repentance or 10 Days of Awe is a period of time is often referred to as the High Holy Days ending with the breaking of the fast at the conclusion of Yom Kippur (Tishri 10).  These ten days are set aside each year so that a person can examine his own heart. It is considered a time of deep reflection on one's own personal spiritual walk with God. We are to search our ways and try to find ways to improve and be better people. We pray that God will show us where He wants us to change and to help us be more obedient to His word. Often folks fast during this time or at least on Yom Kippur.

Shevat 15 (Tu B'Shevat Tu means 15) or New Year of the Trees originally marked the date for calculating the tithes of the harvest that farmers would pledge to the priests of Israel.  This was the start of the year from the point of view of tithing of fruit trees.  Today, it represents a national Arbor Day in Israel, with tree planting ceremonies.  This begins in the middle of the month during a full moon in winter.

In Jewish tradition there are 2 New Years Nissan 1, two weeks prior to Passover in which Yehovah claims is the New Year of Months Exodus 12 :2 "This month shall be to you the beginning of months.  It shall be the first month of the year to you."  said Yehovah.  The second one, 10 days before Yom Kippur, named Rosh Hashanah instituted by the sages.  The other two are not regularly recognized except my the ultra orthodox jews.

As for Hebrew Root followers, they are divided as to follow more than the first one that Yehovah has instituted in Exodus 12:2, Nisan 1.  Some follow Rosh Hashanah as well.  As for us, we just recognize Nisan 1.  As we strip down old traditions, we just want to follow what Yehovah instituted and then we can look into other things later.  We just don't want to get caught up in practicing things that are in tradition only unless we understand what we are doing and why.